Year 2009, I have just bought belly boat/drifter/ floating ring. Pick name you like to use. It was also first fishing trip for Satu with me, well it was holiday trip and little bit fishing. If you ask from Satu it was fishing trip with little bit holiday. Anyway, we headed to Sweden and Stora Sjöfallet. It was exploring trip, I had never been there or never heard anything about that area. Just looking map and trying to find something which could be nice to fish and also see nature. So when we finished our north Finland- Norway (Finnmark) tour earlier, we stopped at home and washed our clothes and of we went to Sweden.

We fished lake where water level is regulated by hydroelectic. Akkajaure is long and deep lake which seems to be very popular for ice fishing. We fished lake combination, four lakes connected by straits. Basicly we fished only one lake and two straits. And from lake only very small area. Satu was fishing from shore and I used belly boat.

Fishing from shore was difficult because of current water level. Water was not low but neither high, so there was huge and deep hill just behind of waterline. It was Satu’s first summer for fly fishing so she had problems for casting in that kind of place. Eventually we found area where she could fish also but she was more like holiday mood on that time than fishing.

When I went to water with belly boat it was weird feeling. Bottom was dropping deeper fast and I could see some huge rocks in bottom. Why it was weird? Well water depth was about 8 meters and I could see bottom, when getting deeper it went all black.  I remember that my first thought was, what if belly boat sinks, even I had life vest on, how to hell get out from there. I fished shortly that area but had feeling that it is not right place. So I moved to fish strait which was not far from us.

I saw some big rocks rising from water, so it was helping me to read water and also find fishes. I had few small graylings from there just before heavy wind came. Wind was pushing me back to starting point so I came out from water and went ”upstream” and against the wind. Back to the water, wind was getting harder but belly boat was really stable and good with that. I used my feets to slow down drifting and kept fishing. Soon I got bite, I had no idea what I have and it was pleasent suprise when I got arctic char up. It was my first arctic char ever. I was like, hell yeah, now we are talking about and so on. And as usual when you got that feeling everything is dying and your feeling is like what the hell. It was getting late evening so we went back to camping area to cook.

Next day we returned, I fished again area where I got arctic char but there was nothing. So I drifted slowly close from shore and fished about 1 km ”downstream”. There was next strait, that was longer one that other one. It had huge stones in bottom, and it was not so deep than other one. I could see bottom all the time and measured that deepest point was about 4 meters. I focused my fishing to area where it was  about 2-3 meters water and big stones. I fished around rocks and found hot spot. In short time I catched about 10 graylings, biggest one about 45 cm and smallest 30 cm. It was short and furious session. It was blast. When eating was slowing down, I started to drift forward.

It was great fishing and really interesting. We have never returned to that lake after that. Once we planned to go ice fishing there but it was heavy rain and our last day so we skipped that. Lake has been on my mind now and then. I think there is great potential for awesome fishing. Maybe next summer we return and discover little bit more. Now we have two belly boats so Satu can join me on the lake.

Have a nice weekend
Mika from Finland 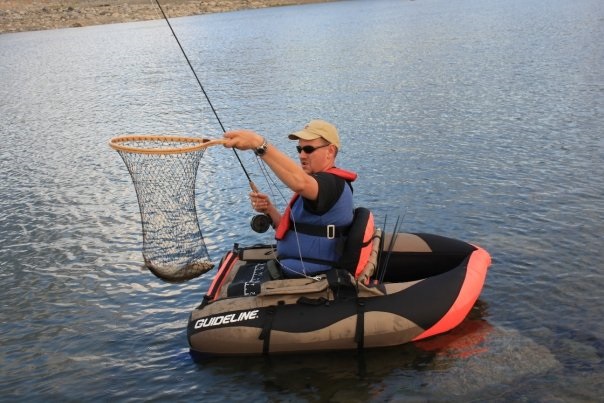 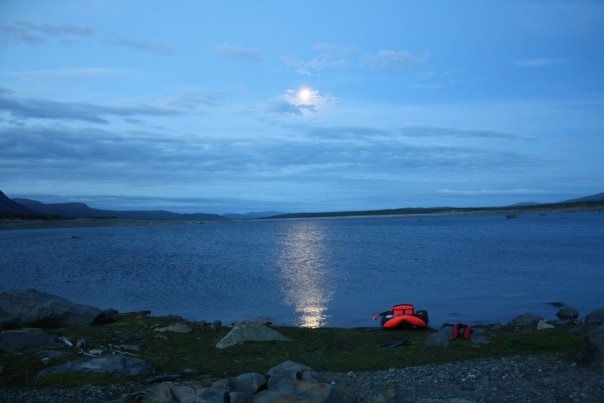